Having made black and red inks, I thought I would try something a bit more unusual. You can see blue, red and black ink used in this 15th century MS, the Livre de Sydrac in the British Library: http://www.bl.uk/manuscripts/Viewer.aspx?ref=harley_ms_4486_f001r
The difficulty was in finding recipes.
So, on with the experiments.

This recipe is to make azure, i.e. blue.
https://sites.google.com/site/makingmedievalink/home/colored-ink-recipes
But uses cinnabar!
However it looks quite interesting, and odd, because it basically takes a typical sort of 14th century distillation recipe for making a mixed acid of nitric, sulphuric and some hydrochloride, and dissolving verdigris in it, when you want to make azure coloured ink.
Now I see no point in trying this with cinnabar, because it probably doesn’t have much effect and I’m saving my mercury exposure for other experiments, but as it happens, I have several acids lying around from earlier alchemical experiments.

So if I take one of them, and add some copper carbonate, I get this: 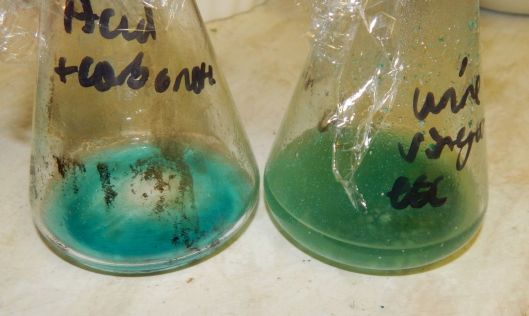 THe flask on the left has the correctly coloured liquid. It is rather blue, which is hopeful. Not all the carbonate has dissolved, and the final problem is how to make it thick and yet watery like ink.

They don’t say what gives the colour; certainly running a hand held XRF over the ink would be an interesting exercise, although I’m not sure it would be sensitive enough to detect everything. It would surely pick up red lead or lots of copper or iron or mercury.

So, I tried the watery stuff, unsurprisingly it didn’t work as ink, rather as drops of water. So I heated it up with some gum arabic, and it thickened up. However not enough and you can see the result in the last photo of this post.

A recipe for green ink, according to page 27 of “Introduction to Manuscript Studies” by Clemens and Graham, in a 15th century recipe, is:
“To make verdigris green. Take one pound of copper filings or scraps and wash it a little through a linen bag. Take ground egg yolks, quicklime, tartar sediment, common salt, strong vinegar, and boys’ urine, and mix everything in the vinegar and urine and put half of it in a copper vessel and stir four times a day, then put it over heat or in the sun to dry.”

Simple huh. Except not really. How do you prepare the dry ink? What have you done with the other half of the mixture?
Fortunately I have some copper powder, and all the other ingredients.

Leaving out the egg yolk, I put some vinegar, urine, quicklime, tartaric acid, salt into a beaker, stirred about, and added copper carbonate, which made it go green, which is a good start, and it is in the vessel on the right in the first photo.

After adding the egg yolk, it turned this colour: 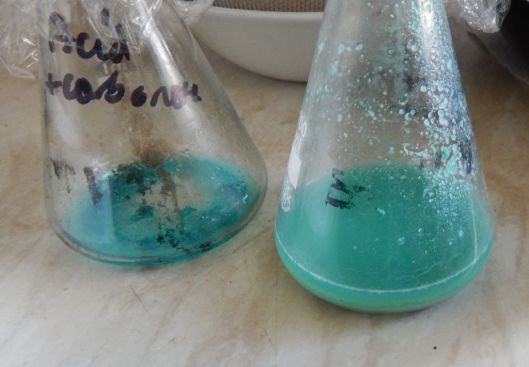 Again, the one on the right. A bit more blue. As it was, this stuff was the wrong colour and too watery to use as ink, not to mention a bit lumpy. I heated it, and it turned back a bit more green, but was still rather lumpy and too watery to be useful.

I tried them both, acid on the left, egg etc on the right: 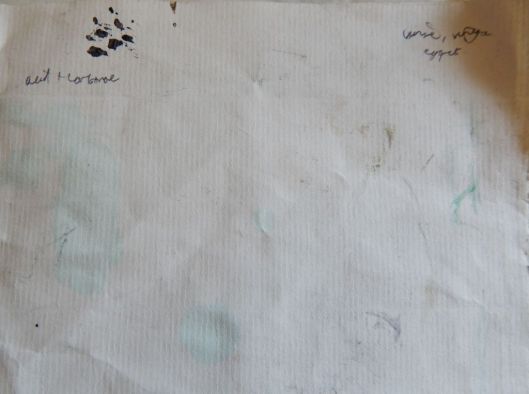 Neither flowed well at all, and both had rather a blue colour.
So, the end result is failure on both recipes. Okay, not grinding the egg yolk probably didn’t help, but I have to wonder about the practicality of the recipe.

I’m saving my money to buy gold to experiment with, so haven’t purchased some lapis lazuli.

So I decided I needed some red ink for writing, as seen in many manuscripts. Of course it turns out that vermillion, that is, mercuric sulphide is a bit toxic, as is red lead, which is the other commonly used medieval option.
Which immediately makes me wonder what they used in the manuscripts I have been handling!

Fortunately the internet has lots of information, some of it from real people who know what they are talking about. It turned out that the simple safe one was a 16th century recipe using Brazilwood:
http://travelingscriptorium.files.wordpress.com/2012/03/scopa-recipes-booklet_web.pdf

Of red colour, and first of Brasill.
You must take care when you seeth Brasill, that you do it when the element is clear, without clouds, rain, or wind, otherwise it will not be good you must make it thus:
Take quicklime poure rain water upon it, let it stand all night, in the morning poure the water softly from the lime or straine it through a cloath, & for a quart of water, take an ounce of Brasill, let it seeth till it be halfe consumed, then put into it one ounce of gum Arabike, two ounces of gum of a Cheritree, or else two ounces of cleane glue, straine it from the wood: you may likewise put into it some chalke beaten to pouder.
END_OF_DOCUMENT_TOKEN_TO_BE_REPLACED

I’ve been doing more research on medieval ink recipes. It’s all a bit complex, and it was clear to me that there were many different recipes all of which would work to a greater or lesser extent. There were different proportions of oak galls, iron sulphate, gum arabic; some used vinegar, some wine, some both.
To add to the fun, there were also ink recipes that used carbon black, but they appeared a bit earlier than oak gall ones and were out of date by the 13/14th centuries.
There has also been a lot of discussion amongst amateurs, and perhaps experts too, about why some ink ends up brown and some black. Lacking any analytical equipment, it had occurred to me that the black ones were lampblack and the brown ones were oak gall ink.
Now if only all the combative people would catch up with modern research which I have below the fold…
END_OF_DOCUMENT_TOKEN_TO_BE_REPLACED

Professional therapy in the heart of Brighton