For years I have had trouble finding quills for writing with. I’ve asked people about finding them, but some are stupid and think you can magically find good feathers for quills anywhere in the countryside. Of course I have walked a lot in the countryside, and not found any suitable feathers. Except last weekend I might have done. So this post is about trying to prepare them for use as quills.

I expect that as an alchemist you could probably afford to buy ready made quills, until of course you ran out of money, but you would certainly have to be able to sharpen them for use. Who made the quills I haven’t be able to find, perhaps professional scribes produced lots for sale. Anyway, onto the research into how they were prepared.

“Scribes and Illuminators” by Christopher de Hamel is a good place to start. It describes trimming the feathers so that you are just left with the top thicker inches of the main stem. Then you harden it by plunging it into hot sand when damp. This is to harden it and yet make it more flexible. You then need to remove any remaining outer skin and pith within the barrel of it.

Cennini, in his “Craftsman’s handbook” of the 15th century, describes how to cut the quill for drawing, and says that goose feathers are best, and emphasises the importance of a sharp penknife.

Unfortunately he doesn’t mention heating it in sand to toughen it.

This all seems far too simple. Unfortunately there isn’t an obvious source of information about how hot the sand should be. Therefore I am reduced to heating a pot with sand in it in the oven.

First, the pot with sand in, fine grained sand: 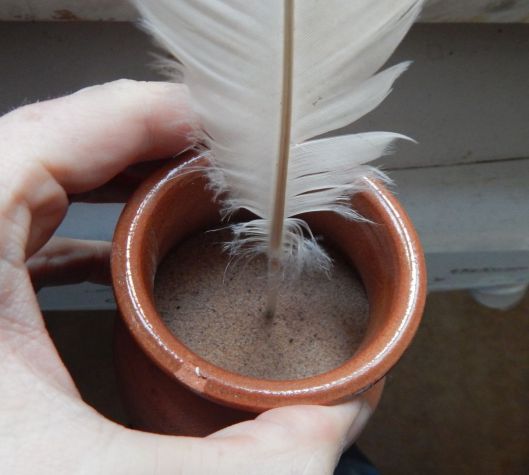 Pot by Jim (http://www.trinitycourtpotteries.co.uk/), probably the best historical potter at work in the UK just now.

I used my ordinary kitchen oven, on the grounds that they wouldn’t have had much to play with in heating the pot. The question is why they used a pot with sand in the first place. Probably it was the most controllable way of doing it without exposing the feather to a naked flame.

First attempt with feather 1 was 2 minutes at around 50C, cooling. No apparent difference in the feather.

Next same quill dampened, 80C straight from oven, for 5 minutes. Temp at thermometer reached 82 after 90 seconds, indicating pulse of oven heat still travelling through sand. Also clear that sand acts as a temperature moderator, like with Alchemists and their sand bath, smooths out pulses in heating that might burn things. Thermometer at 85 by end. The tip of the feather was starting to look brown.

So dampened it again and put pot back in oven to 140C. No thermometer this time, it doesn’t go that high, so temperature is approximate. After 5 minutes, quill looks okay, no obvious physical change to it. The outer skin comes off easily as can be seen here: 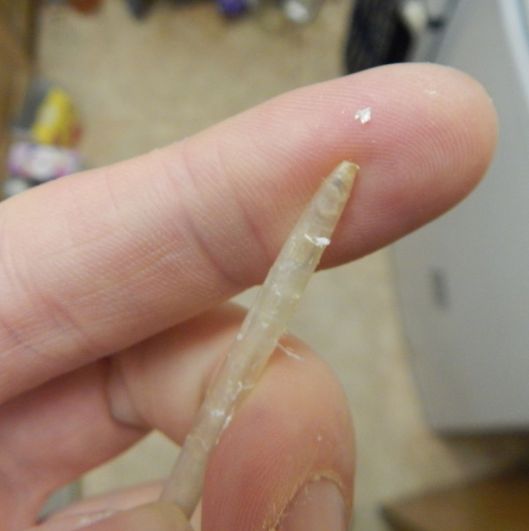 Higher temperature again – 180C for 7 minutes was enough to cause the quill to go brown. Clearly too hot. Perhaps could be done again with much less time in the sand, but that would be a bit iffy and I don’t have spare feathers. 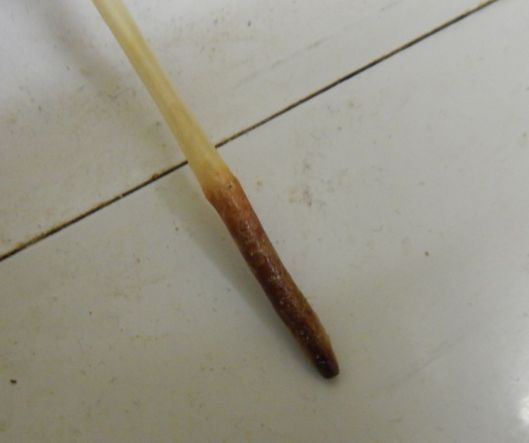 Now for the cutting test. I use a penknife from Tod’s Stuff (http://www.todsstuff.co.uk/knives-domestic/penknives-domestic.htm), one of my more expensive early purchases, but worth it. Unfortunately sharpening it is tricky, so it doesn’t cut as well as it should. Most of you will know about cutting pens already, even if you don’t have any skill at it. I don’t have much, it’s a bit fiddly, but I have managed to make usable pens before.

Feather 1 was irritatingly plastic and flexible, and to find decent material I had to cut off nearly a cm of it.

Feather 2 was stronger, and less flexible. The obvious explanation is that the two different feathers, with slightly different diameters of tube and length were of different wall thickness and strength. Obviously I’d need to compare a lot of feathers from specific wing positions to get a scientific answer.

Anyway, feather 2 was generally easier to deal with when cutting it, but I don’t have any ink handy to do a writing test.

So in conclusion, you can probably heat your damp feather to anywhere between 90 and 140 degrees C (but no higher) and get a usable feather out of it. Whether this is precisely what medieval people did, we can’t tell. I also need to test cut a non-treated feather, to see what it feels like. So as usual I end with more questions than answers, but have hopefully narrowed the available possibilities for experiment and helped someone who might do it themselves at some point.

I appreciate I’ve not been putting up the usual colourful/ on fire/ interesting fact-full posts recently, but several things in real life have gotten in the way. Number one is actually having a job. Number two is, it was the re-enactment season (Still is for some people), and I worked out that I have spent 18 days away from home visiting the 15th and 16th centuries since the end of April, being especially busy in June and July. Since that includes several hours packing and unpacking at the end of every period of time away, I have had less time to write or experiment.

I’ve also been working, slowly, on my big alchemy book, whose provisional title is “Backyard Alchemy”. The issue I’ve found there is that I don’t want to put all the stuff from the book on my blog before I actually manage to finish the book and find a publisher. Thus I have been more careful about what I have posted, and not put up a couple of posts of things I will likely mention in the book.
Another problem is simply that summarising a million word of other people’s research into alchemy into two dozen chapters, which also have space for my experiments, is actually quite hard. It is important to leave stuff out, and what I leave out might not be what you would leave out. It would be simple to write nonsense about alchemy, but writing something factual and useful yet interesting is actually a bit tricky, and summarising things well is also quite hard.
Nevertheless, I have managed to reach about 70% completion of the writing, with another 10% hanging on certain experiments, 10% drafted and the last 10% needing to be written/ sorted out. The experiments however are the problem, some need to be re-done, others have led down rabbit holes which need to be explored or ignored.

So keep watching here, I am carrying out more experiments and lining other things up for your entertainment and education. I hope to start finding an agent or publisher for the book at the end of the month, as long as I manage to bash some more word into shape and finish a couple of experiments.

It seems to be a commonly held belief that having references1 in your work, or indeed footnotes in the text itself, puts normal people off reading the book you have lovingly written.

I however have come to the conclusion that it really doesn’t matter, and if anyone is actually silly enough to be put off by such things, they probably shouldn’t be reading the book in the first place.

1) exactly what is offputting about having numbers in your text is still unclear to me.

Now, I reckon that one way of gauging the effect of references etc is to look at popular books and seeing what they have. After all, if a book has sold well despite having references and a bibliography etc, then maybe that doesn’t really matter.

“The Time travellers guide to medieval England” by Ian Mortimer– has superscripted numbers referring to notes at the back.

“Britain in the middle ages” by Francis Pryor – Has references inline leading to notes at the back.

Both are well known books, and have sold well.

A little more esoteric, although still a bestseller, “Uriel’s Machine” by Knight and Lomas has references by footnote and a bibliography.

How about something more academic? There’s “Making a living in the Middle ages” by Christopher Dyer. Weirdly, this actually doesn’t have references and notes, rather at the back it has sources for the broad area of information in each chapter. Strange, that a book written by an academic has less academic signs than those written by others and meant as popular books. I have sort of tried this approach in the past, but now think that actually the more direct and specific the links you can put in the better for the reader who wants to know more.

So in conclusion, I say that any ideas about putting people off a work by having references and suchlike is old fashioned, unnecessary and a hindrance to informing people.

Those of you who like books will find these observations and complaints very familiar. There aren’t enough differences between then and now for there not to be, since we still read text in books, even if it is produced differently on paper by a machine. These are taken from the book “Introduction to Manuscript Studies” by Raymond Clemens and Timothy Graham. On page 23 we have a comment written by the scribe Florentius of Valeranica in a 10th century Spanish copy of the Moralia in Job of Gregory the Great: “The labor of the scribe is the refreshment of the reader: the former weakens the body, the latter profits the mind. Whoever you may be, therefore, who profit by this work, do not forget the laboring one who made it, so that God, thus invoked, will overlook your sins. Amen. Because one who does not know how to write thinks it no labor, I will describe it for you, if you want to know how great is the burden of writing: it mists the yes, it curves the back, it breaks the belly and the ribs, it fills the kidneys with pain, and the body with all kinds of suffering. Therefore, turn the pages slowly, reader, and keep your fingers well away from the pages, for just as a hailstorm ruins the fecundity of the soil, so the sloppy reader destroys both the book and the writing. For as the last port is sweet to the sailor, so the last line to the scribe. Explicit, thanks be to God.” END_OF_DOCUMENT_TOKEN_TO_BE_REPLACED

Professional therapy in the heart of Brighton