I was recently reading Sebastien Moureau’s paper “Elixir atque Fermentum: New investigations about the link between psudo-Avicenna’s Alchemical De Anima and Roger Bacon: alchemical and medical doctrines”, and on page 290 it refers to the importance of the right, propitious time to carry out the work.

The note to it has more information:

“The calculation of the right time (arabic words for it in this space but I don’t have the keyboard for it) for the alchemical work is found in several Jabirian treatises; cf Kraus Jabir ibn Hayyan II, 8. The importance of the astral influence reminds one here of the Arabic magic, as, for example, in the making of talismans, cf. Also “Conclusion”, pp 332-33.”

I think it clear that the idea of propitious times etc goes back a lot farther, given how Zosimos railed against them, so an interesting question is what lines of transmission were there? From what I have read, they were undoubtedly many, parallel and only some of them alchemical.

Now now another interesting question is, how much of this approach actually survived into Medieval Europe? Not much, according to William Newman in “Secrets of Nature”. Or rather, why on earth did it not survive? Europeans imported so much, including astrology and alchemy and medical works, why did this idea not survive?

As usual, I’ll need to read a lot more to have a decent idea of an answer. So don’t wait up, this could take years. Or maybe you have a better answer?

Actually, you can also see the link between astrology and alchemy in “The book of the Treasure of Alexander” which is a mixture of astrology, alchemy, instructions for making talismans and poisons that dates from the 9/10th century AD. It says, for instance:

If you want to purify tutia, do so when Venus is in her sign with the moon making a positive aspect to Venus and Saturn is in his sign of exaltation.”

Clearly prescribing a time to carry out an operation.

Perhaps one reason such information did not carry over into Europe so easily was the association with talismans and astrology; the making of talismans was regarded as magic, often of a bad sort, and generally frowned upon. Yet astrology survived.

I’m sure some will say that the information about astrological timings to carry out the alchemical work was passed on by word of mouth. But that idea doesn’t work, because 1) if the Arabic texts mix it all together, why would Europeans separate it out? I can’t think of a good reason. 2) So many alchemists are on record about how they learnt alchemy from books, there simply wasn’t the unbroken master-pupil relationship that many obsessive people claim there was, so passing it on by word of mouth wouldn’t work. Obviously that leads to the suggestion that that is why it isn’t popular in European alchemy, but I doubt it.

What is much more likely is I think that the works translated were not as many or as often as people sometimes think, and in fact the astrologically related ones were not amongst those that were. It is pointed out that several Jabirian treatises mention an astrological link, but we know for sure that not all Jabirian treatises were translated in the medieval period, and I think some still aren’t available in any language than Arabic.

So a minority part of alchemy gets lost through the vicissitudes of copying and translating.

Or, How to lose friends and make enemies

The downside of following authentic alchemical recipes is that, even although they are safe enough, some of them stink.
So it is with salt of urine.

The Kitab-al-Asrar of Ar Rhazi, the famous Arabic physician and alchemist has a recipe for making salt of urine. It says to take 10 litres of urine, leave it in the sun for 40 days until it becomes solid, or else put it in a fire until it becomes solid.
As you would expect there is an ammonia like smell to it. The recipe says you can let it become solid in hot ashes.
Possibly I botched this recipe a little, because I had a black substance when I had boiled all the moisture away: 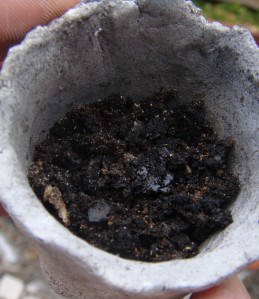 By the way, the horrible bubbling black stuff from that video a couple of weeks ago is this experiment. END_OF_DOCUMENT_TOKEN_TO_BE_REPLACED

You don’t want to know. Results to come next week.

This experiment started out as an attempt to make a mineral acid. Mineral acids are made from minerals such as green vitriol (Iron sulphate), saltpetre (potassium nitrate) and others. They were used by medieval alchemists to dissolve metals.
The origins of them are still a little unclear – I thought it likely, based on what I have read, that they were invented by Arabic alchemists some time in the 12/13th centuries AD, following in natural progression from the distillation of solutions of the minerals mentioned already. Others think they were invented by European Alchemists in the 13th century, especially in Spain.

One way to prove the argument one way or the other is to find an Arabic text which tells you how to make acids, from the right period. But the earliest definite recipe we have for nitric acid comes from a work of pseudo-geber, writing circa 1300AD in Europe, and thus not Arabic at all. It uses iron vitriol, saltpetre and alum, distilling them together to make nitric acid with some sulphuric acid from the alum.

One researcher, Ahmad Y. Al-Hassan, reckoned he had found an Arabic recipe. In a Liber Luminem Luminum, attributed to Michael Scot by historians in the 19th century, but probably not by him, there is a recipe which says (in the 19th century printed version): END_OF_DOCUMENT_TOKEN_TO_BE_REPLACED