A while ago Chem Heritage Foundation tweeted a picture of one of the drawings from Elias Ashmole’s 17th century copy of Thomas Norton’s Ordinal of the 1470’s. This reminded me that there are some differences between the original illustrations and the copies, as I noticed years ago. But good quality colour copies of the medieval pictures are hard to find.

Fortunately I have tif files of the originals that I purchased from the British library for study purposes, so I can tell you about them but not put them up here. Instead you’ll have to do with low quality pictures.

Now, the picture in question is this one, in the 17th century Ashmole edition of Theatrum Chemicum Brittanicum: 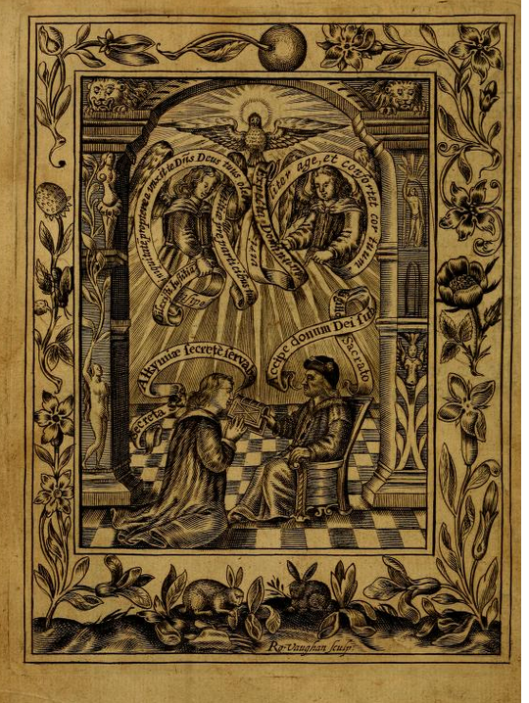 Note that Norton seems to be about to kiss the book proffered to his lips. The original picture has two books being offered by the wise man, and the upper one is approaching the kneeling mans lips, it isn’t that definite that he is intending to kiss it, in my opinion; maybe it is being proffered to his close lips for the symbolism with the wording in the picture. Moreover this Ashmole edition is in black and white, missing the bright colours of the original.

The texts from the angels seem to match at least,

(From the ever helpful Paul Ferguson, here: http://www.alchemydiscussion.com/view_topic.php?id=623&forum_id=8&highlight=Thomas+Norton )

Oddly, someone seems to have made a coloured version too, in Ashmole 971 in the Bodleian library, which has made copies of the images available online.

This one appears to match that of the original more generally in colour, but seems to be even more crudely drawn. It doesn’t have the naked women on pillars that the black and white printed version has. It also has an angled tiled floor, unlike the printed one and the original.  The original has proper mediveal gothic pillars, but no lions heads at the top, unlike the later copies.  I do wonder if the coloured version is based on the black and white one, or is it the other way around?  There are white birds with halo’s in all of the illustrations.

There is a fourth variation of the illustration, that found in the Ferguson collection one, which dates to the 16th century and thus only 30 or a hundred years after the original was produced.  It is also crudely drawn, and appears not to have been finished, insofar as the margin of the page is blank, where in the Ashmole black and white drawing it is full of plants and animals, which mimicks the original which has somewhat abstract plants around it.

But it does more closely match the original picture, in ouline, in the clothes the men are wearing, in the architecture about them, in the two books, one red and  one blue being presented to the supplicant.

Now, the bigger question is of course why bother copying the original so nearly yet not quite? One less book, showing even more reverence to it and the seated man, and did all the colours mean anything?

I suspect that Ashmole was consciously updating a lot of the real and perceived symbolism in the pictures, hence the changes in fashion.  Perhaps too him or his illustrator had not really had a chance to look much at the original picture.  The fact that they have tiled floors and very similar presentations of the angels holding texts in the Ashmole copies suggests to me that the illustrators had seen the original one; if they had been working from the Ferguson collection one they wouldn’t have put the tiling in since it is missing in that one.

In fact what is missing completely in our undestanding of it all, or at least in mine, is how Ashmole got to see the original manuscript in the first place!  So I turn to Reidy, who states that nothing is known of it before it was owned by Richard Heber, who lived from 1773- 1833, and after his death the British Museum purchased it from the sale of his library in 1836.  Apparently Ashmole describes a similar manuscript lent to him by a gentleman which he used as the basis for his text in the Theatrum Chemicum Britannicum of 1652.  I think it worth quoting Reidy in full here:

“A slight difference existed, however, for Ashmole speaks of ornamentation of ‘Flowers, biurds and beasts’, and of the Nevilles’ coats of arms; the present manuscriopt has only flowers and no coats of arms.  Neither can this manuscript be Hendry VII’s own book, or we should know more of its history.  None the less we habve the interesting case of three almost contemporary presentation copies with almost identical illuminations.”

Weirdly, Reidy seems to have missed the Ferguson copy, http://special.lib.gla.ac.uk/manuscripts/search/detail_c.cfm?ID=8345 and he lists only 31 manuscript editions in his transcription and explication of the Ordinal.

The Ferguson MS is a generation or two later than the original illustrated ones he mentions.

In fact, thinking about the illustrated versions that were around at the time, Norton’s Ordinal has to be one of the earliest expensive presentation alchemical works in England, if not Europe.  There was a great flourishing of them in the 16th century, but not so much in the 15th.  And what did Norton gain by such expensive acts?  A modicum of fame, certainly, within some circle of people, but it is unclear now how much that circle was courtly, noble, scholarly or what.  So many possible answers, but we don’t have the evidence to tell the wheat from the chaff.

This one is one of my favourites, yet it has hardly been looked at by modern researchers:

The first part of antiquarian studies consists of working out the date and provenance of manuscripts. In this case it was owned by John Dee and looked at by Elias Ashmole, as well as modern people like Dorothea Waley Singer who made a modern catalogue of alchemical manuscripts. Once that is done it might be decades before anyone takes it in hand and examines it properly.

I have held and looked at this MS myself in the British Library; when I am feeling a bit uninspired it really perks me up to look at the original source of information, previously held by such famous people as Dee and Ashmole.  Yes, you too can get to hold something read and thought over by such famous people!

As a 15th century English manuscript it has a number of interesting points which to me broaden our understanding of alchemy. For starters there are several illustations similar in intent to those in the Ripley Scrolls, which are a late 15th/ early 16th invention. (Stolen from the British Library website, they seem to be copyright free)