As many of you know, I do medieval and Tudor re-enactment, where I demonstrate a variety of historical technologies and knowledge. One being alchemy. I have done all sorts of things:

Burning stuff, such as sulphur

And some other things which I can’t remember. During these procedures various other things have happened, such as a potash glass vessel breaking due to the heat being too strong on it, flooding the furnace with water and putting it out. Or discovering that the fumes of the divine water turn copper silver.

Actually I haven’t done any alchemical demos for nearly 2 years now, because of the hassle of setting up and taking down and the preparations necessary. I am not sure I’ll manage any this year, it depends on what events I attend.

Now, here are some photos of stuff:

My furnace, from the back. 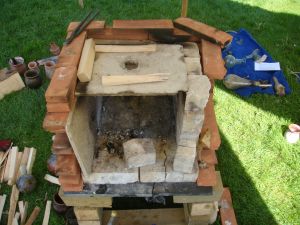 Note that the base is squared wooden logs; not exactly historical, but people object when I ask to arrive two days early and dig up their lawn. The base on them is a sheet of stone, which accidentaly split in half because it got a bit warm one event and the blocks of wood weren’t as flat as they should have been. It actually makes it easier to deal with though because the slab as a whole weighs maybe 15kg.

Anyway, between that, the squared wood and the weight of the tiles you can see above, the furnace is nice and stable and you’d have to deliberately throw it over to cause a problem.

The modern furnace bricks that act as an insulating base are also clearly visible, as is the insulation board I use. The board can be cut with a knife but isn’t very durable, heat making it more rigid over time so you only get a couple of events out of it. I am going to buy some more durable insulation later this year. Note also the tongs, useful for moving crucibles and wood and stuff. A good rake is very useful as well, mine is copied from one in Biringuccio I think.

Front view of furnace.  Note the way the tiles interlock, as I intended them to, but handmade tiles can be tricky to deal with, and I found a slab of stone of the right size.

Now, here are various bits of equipment.  From the pole of a fire shelter, essential to keeping the rain from things, you can also see pottery alembics, pottery vessels used for heating and boiling liquids, and some small pottery dishes for storing stuff in.  You can also see my alchemical notebook at the left near the pole.  And an essential bucket of water for cooling things off and in case the grass catches fire or something. 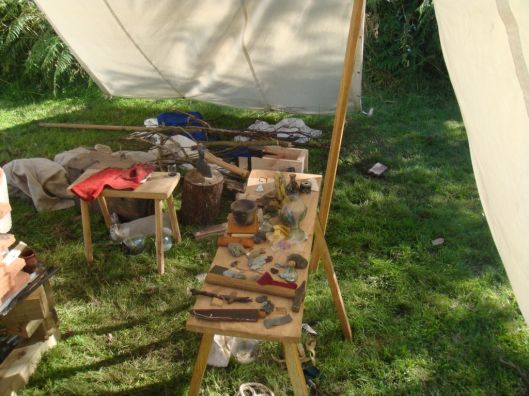 The small table has proven to be invaluable, for keeping stuff off wet grass and keeping it in view of people.  On it you can see a hammer for bashing metal, a crucible, some samples of all the medieval metals and mercury.  An axe for chopping wood.  Several glass bottles.  Remember, although in many countries it is illegal to distill alcohol there is nothing wrong with putting some whisky or such into a bottle and pretending you made it and getting people to drink it.  I did that at Linlithgow Palace in 2009.  The King got one of his retainers to try it and the retainer choked a little on it but rather enjoyed it.  A stool is important too for something to sit on during the event, being on your feet for 3 or 4 hours without a break is tiring.

The problem is of course that if you want to do this at all accurately, you either need to be really good with your hands and have a handy furnace and wheel and equipment for making pottery and glassware, as well as bricks and suchlike, or else you have to buy most of it. Which is where it gets expensive.

But spread over a number of years, and certainly no less than many people spend on their nice shiny armour.  I am sure that I have opened a wider understanding of medieval life and technology in people’s minds with my demonstrations which is nice and a spur to keep doing it and get better at it.

24 thoughts on “My alchemical demonstrations at re-enactment events”